Being a Sweet Transvestite in Transsexual Err… Long Beach, California! 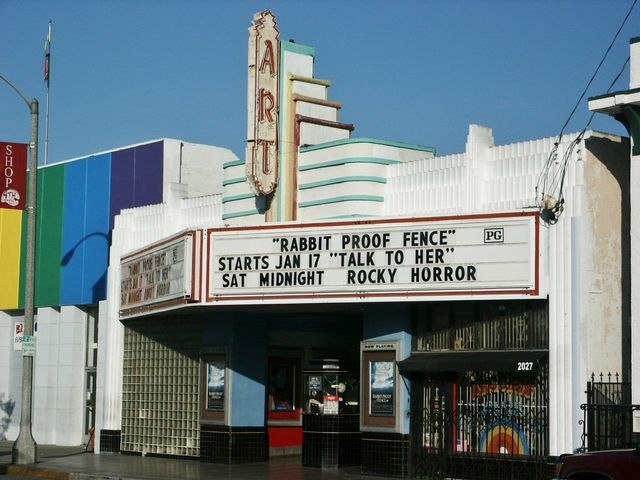 When we first arrived at The Art Theatre in Long Beach, me and my wife Stephanie did not know what to expect. We were about to watch The Rocky Horror Picture Show (RHPS), put on by an acting troupe called Midnight Insanity. We were ‘virgins’, according to the Midnight Insanity staff. In fact, they even drew a big red ‘V’ on our cheeks, to distinguish us as such.

This made us prime targets for what was about to happen.

Before the showing (which is always at midnight) there was a competition that two lucky virgins would have to participate in. And lucky me, for at the time I was one of those virgins. The MC chose me. Well, my wife technically made several gestures towards me which prompted him.

The DJ asked the virgins which cast member we wanted to ’play with’. The MC, noticing I was unfamiliar with the cast, suggested that I choose someone named ‘Glitter Tits’, or maybe it was ‘Sparkle Tits’. I assume she was playing the character of Columbia from the movie.

Contrary to what some might believe, the cast is not all transvestites nor transsexuals. A full-figured woman approached me. This was Sparkle Tits! The other virgin was a young brunette, and she picked another woman.

The virgins were directed to get on their knees. To my dismay, I knew at this point where this was going. Sparkle Tits took out a banana and placed it at her crotch. The Master of Ceremonies explained that the competition was basically who can eat the banana the fastest.

Sparkle Tits grabbed some hair from the back of my head, and I said a quick rationalization in my head, “Hey, it’s all in good fun. She’s a woman. Whatevs.”

So, I started eating the banana. It didn’t help that the audience started taunting me. Some annoying dude in the audience was saying corny lines like, “Good sluts don’t spit” and “Take it all in, baby”. Meanwhile, I’m just trying to eat a banana.

Well, to my horror, I won that contest. I sheepishly grinned and raised my arms in victory. The MC presented a basket, from which I could pick a prize. Again, lucky me, I pulled out a copy of a Blu-Ray movie rendition of Ayn Rand’s Atlas Shrugged. If you know me, Ayn Rand is almost the complete opposite.

Managing Editor Andrew Perry in the center flanked by the scantily clad cast of The Rocky Horror Picture Show at The Art Theatre in Long Beach, California.

My Impression of the Show

So that was my virgin experience. But how was the show?

I won’t spoil it, but if you’ve seen the classic movie, that movie is basically playing in the background, while the Midnight Insanity cast act it out on the stage in front of the screen. Simultaneously, the audience recited a series of lines timed to the movie. I suspect these were passed along “orally”, but I wouldn’t be surprised if there was a script.

The best way I can describe it: it’s as if someone’s Freudian Id went out of control after watching a movie a hundred times, and that Id manifested itself through loud outbursts of curse words and naughty jokes, while occasionally pulling out random props that tangentially went along with the movie.

It was definitely very immersive. There are even parts where water drizzles from the ceiling during the rainy scene of the movie. Prior to the movie, we were given an option to purchase a small bag with a bunch of props, either for noise, or to throw, or to cover ourselves in the event of rain.

The dancing and carrying on was very entertaining to watch. One of the women, very voluptuous, even stripped topless, except for pasties over her nipples. Another funny point involved the character Rocky, portrayed as a man wearing nothing but golden shorts. At this particular show, I think the person playing him was actually gay, but he had a few scenes with women. And he was very vocal in his displeasure.

This is a very LGBTQ-friendly show, too. If you’re too dogmatic in your religion, this show is probably not for you.

Would I recommend it? Yea, of course! I had tons of fun, even though I was admittedly a little bit embarrassed in the beginning. I’m a good sport, though. So, if you’re a good sport, or if you are an adult with a good sense of humor (or a naughty sense of humor) then this is a fun night for you, for a date, or for a night out with friends!

For details about upcoming shows, go to www.midnightinsanity.org or find Midnight Insanity on Facebook.