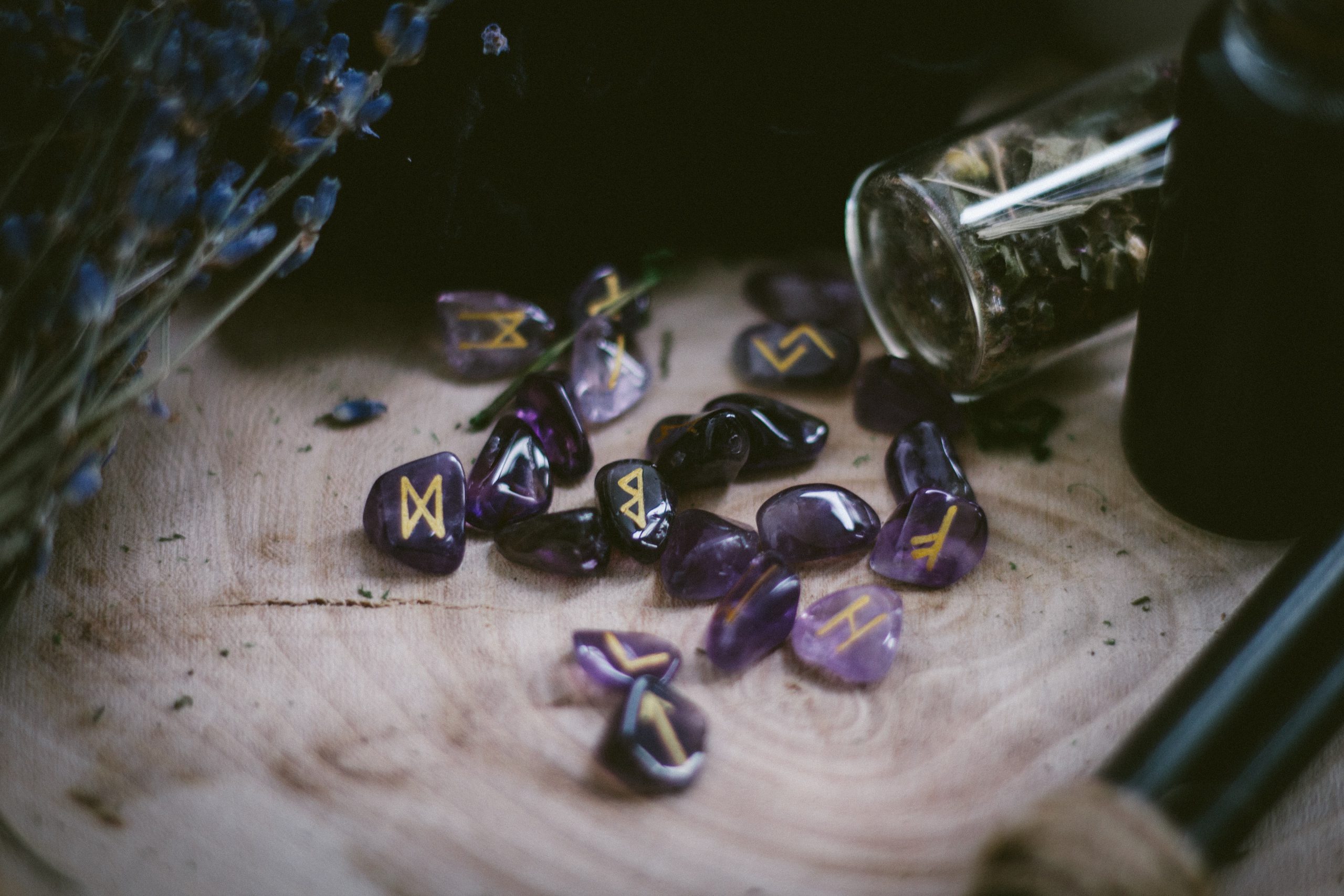 “You’re a brave one, I see,” said Nicole Walter, after I asked for the message that the gods had for me. Walter was holding a small cloth bag filled with runes carved on wood. She then chanted ‘Odin’ thrice in a harmonic tone.

She reached into the cloth bag and presented a rune, this particular one had a line with two other lines diverging in opposite directions, like a ‘Z’ with the middle section elongated. “This is Ei’waz, and represents a transitional state. Its message is that you need to find balance, particularly in your work life.”

Nicole Walter from Orange County and her comrade Sterling Knight from Los Angeles County, are two of a rare breed – rune casters. I came across them at a booth at Esoteric-Con in San Pedro. I’ll say this. The rune was right, or rather the message from the gods was correct, I do need to find balance in my work life! Aside from reporting for TCT, I am employed at a City and have another side business, and I hold prominent roles at a Chamber of Commerce in Orange County, for an employee union, and for a Masonic Lodge. So, I have a lot of things on my plate. I do need to find balance.

Sterling Knight is also a runecaster and an author of several books, including The Oracle of the North, a book about runes, and Heart Partners, which is about measuring the compatibility between two lovers using astrology. Knight also loves knives. He was selling an impressive collection of very well-made knives at this booth. Both can be found online.

My rune reading from Nicole was very similar to a tarot card reading I had the day prior, which said I needed to find balance in my work life.

Knight explained that rune casting does have some similarities to tarot in that there is a kind of psychology behind it. “It differs from tarot because it is a direct connection to a certain type of energy, whereas the tarot is more generalized and has the influence of a lot of different cultures. The Elder Futhark, which these runes are called, are strictly Scandinavian,” he said.

“It also depends on what you are asking,” Knight continued. “Asking the runes for stock tips doesn’t work very well, but if you ask it about taking a job or marrying a person, it’s very useful. But ultimately, it’s your choice. You choose.”

Nicole also added, “I like the runes better than the tarot. With the tarot, I get distracted by the colors and the shapes. It’s very busy. These have the same meaning but they are much narrower and deeper. You have one simple shape and there’s so much meaning in it.”

Nicole demonstrated how a full rune casting works. She presented a quilt and on it a diagram featuring a circle divided into nine parts, representing the nine realms of Norse mythology. She made this quilt herself. This is essentially what happened:

“There are 24 runes,” said Nicole. “There are more letters in the English alphabet, so these runes are not that scary.”

What would a skeptic say about rune casting or the tarot? Well, there is a Skeptic Society out there, so why not ask them? The Skeptic Society likes to investigate these types of occurrences and try to find scientific explanations for them.

Pat Linse is a co-founder of the Skeptic Society, along with Michael Shermer. While the latter is perhaps more well known because he often appears on television, radio shows, or in videos, everyone familiar with Skehyptic Magazine is also familiar with Linse, because she illustrates and designs almost every issue.

Linse said that tarot, rune casting, palm reading, and similar types of knowledge are steeped in psychology, very similar to what Knight had said.

“First you need a method that has some component of randomness or chance such as cards, marked stones, tea leaves, sticks, dice, etc. These methods come with a wide range of traditional interpretations that the person doing the reading can use,” said Linse.

“Then you need to understand the actual psychology behind why fortune-telling, talking to the dead, and psychic readings work. You can go back to the ancient Greeks and Egyptians and they did it the same way,” continued Linse. “These techniques can be compared to a musical symphony or a movie script – how effective and moving the performance is, depends on the talent and skill of the psychic performer. People can be absolutely astonished by the seeming accuracy of a skilled mentalist.”

I really enjoyed my experience talking with Sterling Knight and Nicole Walter. Their knowledge of the art of rune casting and the context of Norse mythology was very informative and interesting. I also appreciate the insight from Pat Linse of the Skeptic Society. Each person was very sincere and kind, and I feel enlightened to have made each of their acquaintances.