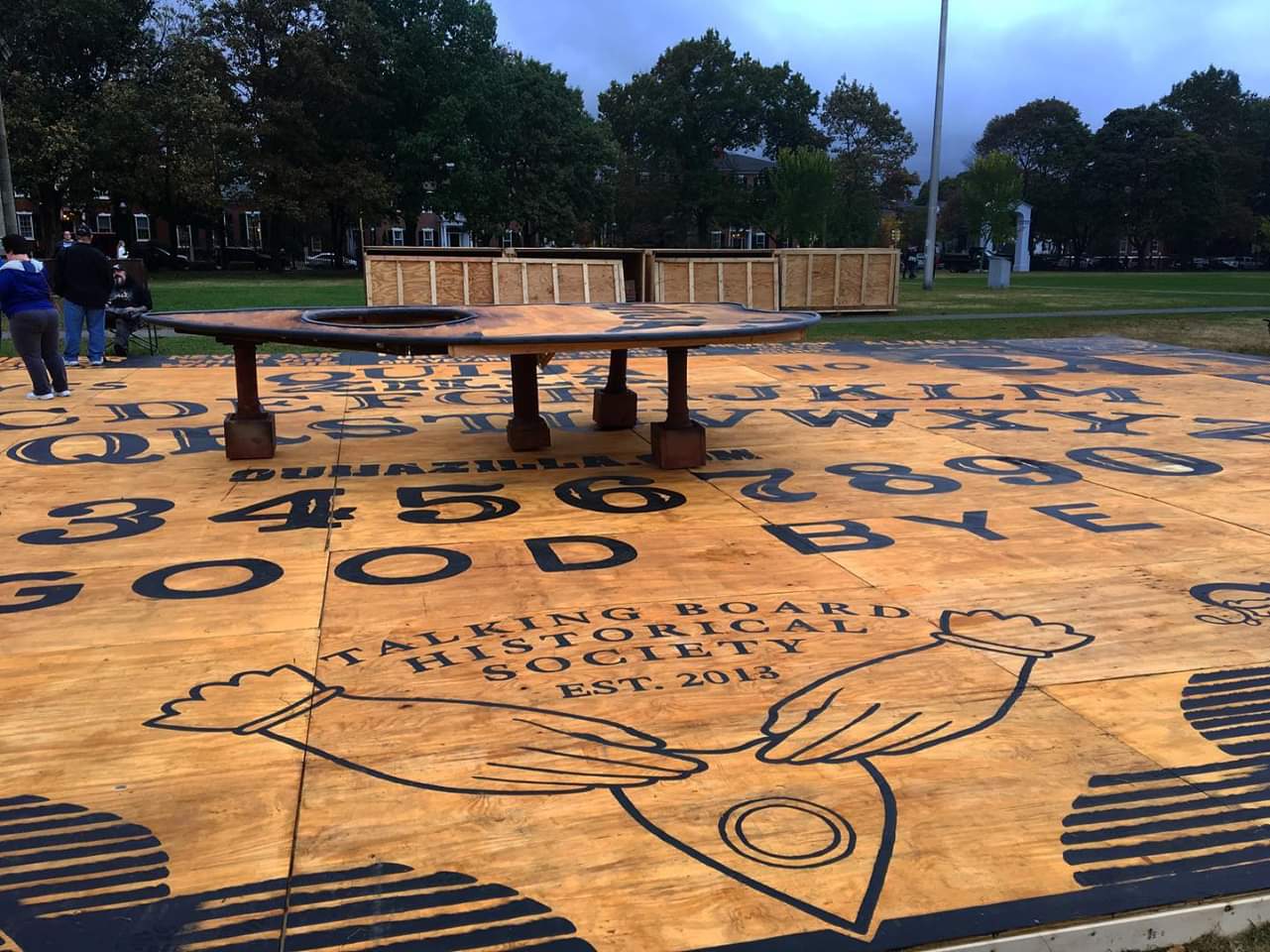 If you want to summon some really big spirits, you’re going to need a really big Ouija board – the world’s largest Ouija board, in fact! On October 12, 2019, the aptly titled “OuijaZilla” – a 9,000-pound Ouija board – was unveiled in Salem, Massachusetts.

At 3,168 square feet, OuijaZilla has more square footage than many houses and includes a planchette over 15 feet long! The enormous board was crafted as a labor of love by creator Rick “Ormortis” Schreck, a tattoo artist and avid collector of Ouija boards, including some totally not creepy boards made out of human bone. While OuijaZilla itself is made out of good old plywood, its giant size has well earned it the title of “World’s Largest Ouija Board,” and could very well lead to Salem – home of the famous Salem witch trials – getting a whole lot more haunted!

Aptly named OuijaZilla this gargantuan board was unveiled in the heart of Salem Common. The hand-painted wooden board and accompanying planchette are modeled after the original Parker Brother’s glow-in-the-dark Ouija board minus a few of Schrecks personal embellishments. He even got the blessing of Hasbro, Inc. to construct this enormous version of their game!

In 1985, at just 15 years old, Schreck bought his first Ouija board. Infatuated with the idea and history of witchcraft, he turned to the library at Cedar Ridge High School for more information, because what high school doesn’t have a Satanism and Witchcraft section? As he continued to expand his knowledge of the subject, his social circle grew to include other like-minded individuals.

Contrary to popular belief, he didn’t start off as an avid talking board collector. In 1992, he visited Massachusetts during the 300th anniversary of the Salem Witch Trials. While exploring the spellbound city, he discovered that there were many different styles, shapes, sizes, and spirits of talking boards. To no surprise, he began his mission to collect them all.

When collecting just wasn’t enough, Schreck began creating his own talking boards. To increase his chances of communicating with the other side, he made planchette out of unconventional materials like animal and human bone, human hair, and even human ashes.

Taking it to the next level, he revealed to us that “real” witches used boards crafted from the lids of coffins. Unable to find a true talking board made from this material, he has taken matters into his own hands. Inside the walls of his New Jersey tattoo shop, lives a vintage black coffin that will be dismantled to create his dream talking board.

Quite the collection, he now has about 300 boards in total. But, even all those boards put together don’t stack up to OuijaZilla.

Construction of OuijaZilla began in June 2018. Through wind, snow, rain, and extreme heat Rick was the sole handyman on this monstrous project. Fueled with perseverance and guided with the help of his hand-drawn blueprints, he painted, designed, and assembled each individual OuijaZilla panel.