In Honor ~ And With Deep Appreciation 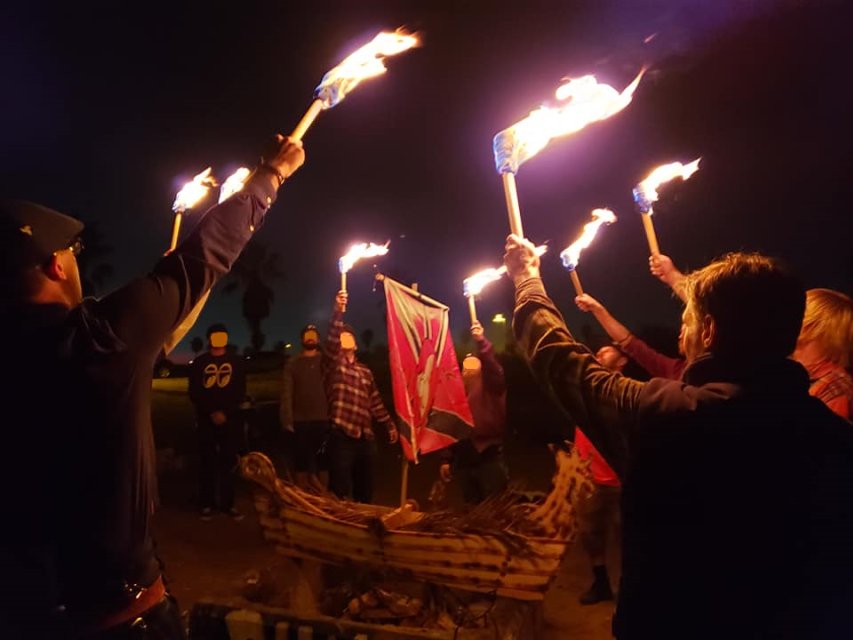 Today is a day where we honor those who have gone into battle and those who did not return, in Norse mythology this day is the Feast of the Einherjar. The Einherjar, which actually means ‘army of one’ or ‘those who fight alone’ … are those who have died in battle and are brought to Valhalla by Valkyries. In Valhalla, the Einherjar eat their fill of the nightly-resurrecting beast and Valkyries bring them mead.

This past weekend a local group, Trufolk Kindred of San Diego, gathered on the beach with other folk, veterans, and active military personnel to honor the fallen and burn a longboat in their honor. Each attendee brought something to add to the ship ~ a memory ~ pictures ~ a horn filled with mead ~ and even a grandfather’s letters were placed aboard the ship and sent back in spirit.

One of the organizers, Heather Nicole Clinkenbeard commented “ We have a majority of the military in our group both veteran and active duty, so this day is a special one for us. I don’t know what it’s like to be in the military or to have been to war but I know I’m grateful for the great sacrifices many have made. I’ve seen firsthand the toll it takes on our brothers and sisters. It changes them forever. Makes them some of the bravest, most real people I’ve ever known.”

We gather today in events and celebrations to honor war veterans, for the fallen, but also we gather to be there for each other. To listen to the ones who hurt the most to witness what they hold so dear.

“The pictures of their friends, the poems of raw feelings that make you shiver and cry,”

Clinkenbeard added, “Of all the events we do, I think this one is the most important.”

This is a time to pay tribute to our ancestors who were slain on the battlefields.  Many remarkable people have sacrificed their all for this country, many are still doing so.

Today I’m thankful for all the veterans.

Related Topics:EinherjarLongboatOdinVeterans' Day
Up Next