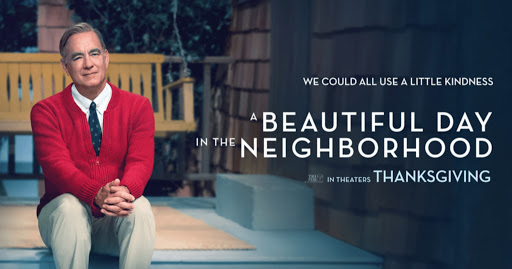 The legacy of beloved children’s TV icon Fred Rogers and his long-running show, Mister Rogers’ Neighborhood, has taken on greater resonance than ever in recent years with its now-adult viewing audience taking the program’s lessons to heart. The first dramatic narrative film to depict Rogers is A Beautiful Day in the Neighborhood. The Academy was pleased to welcome Rhys, producer Youree Henley, screenwriters Micah Fitzerman-Blue and Noah Harpster, and director Marielle Heller to chat about how this project came to life over a ten-year period.

“We realized quickly that Fred Rogers was not the ideal subject for this traditional kind of three-act biopic,” says Fitzerman-Blue. “We actually needed to look at the people in Fred’s life, those whose lives he affected. We were in Latrobe, Pennsylvania, in the western part of the state where Fred Rogers’ archive is and where he grew up. We had read Tom Junod’s article before, but what we hadn’t actually seen was this trove of letters… It was deep, it was about everything, it was about a relationship that we built the movie around.

One challenge for Heller was mimicking the look of the original show for some key sequences, including an opening that was designed to subvert audience expectations. “We worked with the rules of the show, and they shot the show in very specific ways,” she says. “For example, we filmed on these old tube cameras that they filmed on, and the way they would film the original show – is for someone to call ‘live’. One camera would light up on top and that was the camera that was live. So that’s what we did. We could have filmed all three cameras, but we didn’t. We really wanted it to be Rodgers, looking at whichever camera was on, and it had that type of cutting pattern… It was sticking to difficult rules, in order to stick with the authentic recreation of the show.”

Both the director and Rhys found Hanks adjusting his normal fast-paced work tempo to play the slower, more gentle tempo of Fred Rogers, a process Rhys describes as “a great, great deal of effort.” Heller adds of the two stars, “They both have similar energy in real life, both really quick and always joking around. Tom drinks a lot of coffee, and the idea in casting was we were trying to get opposite energies. In many ways, we were trying to show these two men who are foils for each other, who both believed that they’re helping the world but have different perspectives on how they’re doing it. One inherently believes people are good, and one inherently believes people are bad, they believed their job was to expose that truth to the world… It was finding stillness because what happens when you slow down a fast-paced personality, that character will come out in little ways, you know, it has to go somewhere. So it was really like a meditation every day to pull Hanks into a different way of being. Almost like doing Tai Chi or something, but it was actually kind of slowing his whole being down.”

A conscious decision was made to avoid using prosthetics or other tricks to make Hanks look identical to his real-life counterpart (apart from using fake eyebrows made of angora). “I just find when I watch a movie that has a lot of prosthetics and you’re trying to portray a real person, it gets distracting,” Heller explains. “I’m performance first. I love actors and I love their performances, and I’m so in love with the performance that these actors gave in this movie… I love the close-up, and I love feeling like you can see the pores on someone’s face. I pick lenses according to that feeling.”

As Harpster notes, the process of working with Rogers’ estate including his widow Joanne and Company President, Bill Iser was useful during the production so they could ‘hold our hands as we went through it’. Furthermore, as Henley adds, they had access to drawings of the original sets and even clothes from Rogers’ own closet including the real Mr. McFeely bag.

As adults and parents, the process of making the film proved to be both illuminating and cathartic. “Part of the appeal of making a movie about Mister Rogers was it’s a version of masculinity that scares a lot of people,” Heller reflects. “He had ways of being what people might traditionally think of as more feminine. But with Lloyd’s character, showing a man whose version of trying to become better is not just to become better at his job. It’s also trying to become a better human being, a better father, and a better husband. These images of him shouldn’t be radical, but it weirdly feels radical to show a man caring for his baby, warming up milk, singing to his baby, crying, hugging his father saying, ‘I’m sorry,’ saying ‘I love you’… This isn’t a version of masculinity we get to see.”