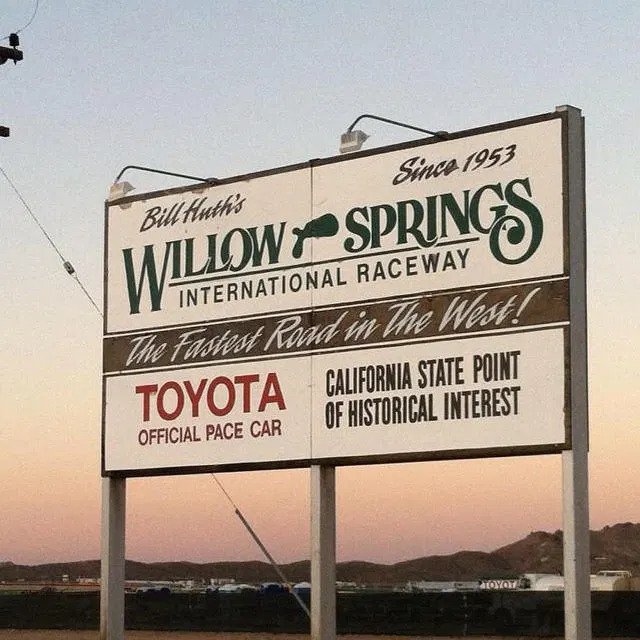 Willow Springs International Raceway is located one hour north of Los Angeles and is a historic race track that has been in existence for more than 50 years. Construction of the track began in 1952 and the first race was held on November 23, 1953. The interesting elevation changes and high average speeds make it a favorite of many road racing drivers.

This world-famous track hosted the first two NASCAR events west of the Mississippi, the first F.I.M. 500 Grand Prix motorcycle race in America, the first AMA events, the first 24-hour motorcycle endurance race, the first kart road racing in America, and the first California Sports Car Club racing on a purpose-built road course. Over the years, track records have been set and broken many times by internationally famous drivers and riders. Efforts by racing fans have resulted in the State of California designating this as a point of historical interest.

On May 24, 2008, a tragic accident on turn nine has now added more historical significance and paranormal activity. Former Planning Commissioner Joe Drey died on turn nine at the age of 75, where he was driving his 2002 Mini Cooper.

Willow Springs is in the Rosamond area of Kern County, about 140 miles north of San Juan Capistrano. Willow Springs is actually made up of six race courses, but the main track is a 2.5 road course with nine turns that the Willow Springs Web site describes as “super fast.” According to the Web site, the course is unchanged from when it opened in 1953, and allows speeds between 70 mph and 170 mph in the corners and up to 200 mph possible on the straightaway. Drey’s Mini-Cooper S crashed in turn nine, the last before the finish line/pit stop area.

Jonathan Volzke from The Capistrano Dispatch wrote, “His passing has broken our hearts,” his family said in a statement. “We are most grateful for having surprised him this past February with a family gathering, celebrating his 75th birthday. Joe said it was the best gift he could ever have had.” His wife, Valerie, said ” Joe died doing something he loved. “What more could anyone hope to have?”

An avid driver, Drey stepped down from the Planning Commission saying then: “I’m finally totally retired and can spend all the time I want with Valerie, family, and my grandkids in Walnut Creek and spending fun time on racetracks with my modified Mini”.

Drey’s 2002 Mini Cooper S left the racing surface at the exit of turn nine and subsequently turned back across the track. While sliding across the infield dirt, the vehicle rolled an unknown number of times, landing upright but causing the driver to be partially ejected from the vehicle. The vehicle sustained significant damage in the right rear, with additional damage extending to all portions of the vehicle. The left front wheel assembly was separated from the vehicle; a fixed back racing seat was properly installed and a DOT approved four-point harness restraint system was being utilized.

Rescue teams were performing lifesaving measures within one minute from when the car stopped rolling and immediate medical aid was administered by NASA Safety, paramedics, and two physicians. Drey was transported to the hospital where he later succumbed to his injuries.

Racers on this track claim to see an older man standing just before the turn, almost causing them to crash. Drivers have reported numerous incidents when upon crossing the finish line, notifying track staff.  It is always checked and double checked upon reporting but no evidence of anyone on the track has been found.