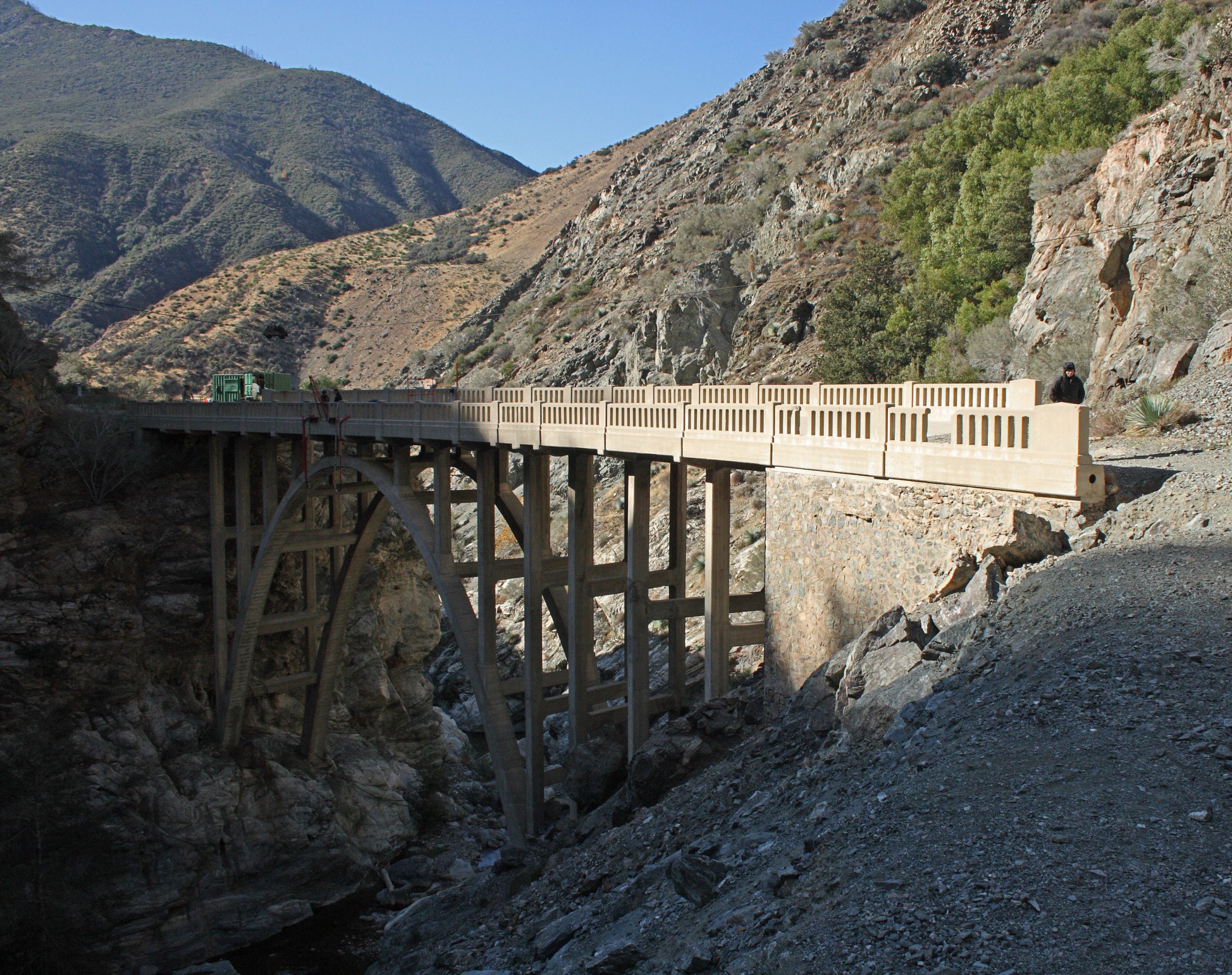 There are many beautiful bridges in California, with fascinating histories and landmarks just waiting to be discovered. Many travel to see the different varieties of design and engineering, while others simply enjoy the evidence of the pioneering spirit of progress …. Then there are those who are interested in the paranormal aspects.

Some report that this is one of the strangest bridges in California, leading to an invisible portal to a Hellish realm is the Bridge to Nowhere is located in the San Gabriel Mountains in Azusa, California.

The bridge was opened in 1936 while still under construction.  The East, Fork, Road to the bridge was washed out, during the great flood in 1938. The city abandoned the project due to the floods. The Bridge to Nowhere now stands frozen in time, in the middle of what is now the Sheep Mountain Wilderness. There have been many fatalities along the East Fork due to the swift running water during heavy rainfall.

In ‘The Far Side of the Sky’ Christopher Earls Brennen writes about the bridge:

“The Bridge to Nowhere is one of the most bizarre artifacts to be found in the San Gabriel Mountains. Back in the 1920s, Los Angeles County planned to build a highway all the way up the East Fork canyon to the Mine Gulch Bridge to Nowhere Junction. From there the road would climb over Blue Ridge and drop down into Wrightwood. It would be among the most scenic roads in America. Construction began in 1929, most of the work being done by County prison work crews. By the mid-1930s the highway had reached The Narrows (2800ft) where the East Fork flows through a very deep gorge, the deepest in Southern California. There it was necessary to construct a concrete bridge high above the waters of the gorge. A tunnel was also chiseled out of sheer rock. However, the winter after this difficult construction task had been completed; an unprecedented storm arrived in March 1938, depositing many inches of rain on the San Gabriel Mountains. The result was a tremendous flood that roared down the East Fork, obliterating everything in its path including more than five miles of the painstakingly constructed highway. Only the bridge was high enough above the waters to be virtually untouched. The futility of the project having been so emphatically demonstrated, the County abandoned their plans leaving a brand new concrete road bridge standing alone in the middle of the wilderness more than five miles from the nearest highway. It became a popular destination for hikers who dubbed it the ‘Bridge to Nowhere’.”

Several witnesses have seen a shimmering mirage when approaching the other side of the bridge; it apparently has a magnetic effect on those who get too close. One report tells that a woman saw a bird fly into the portal and watch it suddenly disappear only to be followed by terrifying, almost as if the bird was being ripped apart by something unholy.

The bridge is only accessible via a ten-mile round-trip hike. During the rainy season, the trail can be washed out. The San Gabriel River which can rise significantly and without warning with heavy rains to the Northeast of the region initiates flash flood warnings to the river. Crossing the river to and from the Bridge can be risky. Even large groups have experienced fatalities.

Reports of crying have been heard along with the feeling of being watched and followed. Mountain lions and snakes are not uncommon visitors. There have also been reports of strange lights in the skies from time to time …. UFOs?  Maybe!

Locals advise staying away after dark, especially in the winter months when it’s most active.

The only way to find out is to venture out on this link into the unknown.